A new paper in Ecological Applications 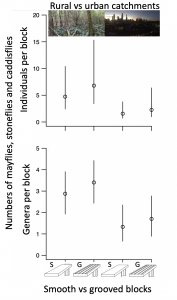 Congratulations to Julia White for the first paper from her PhD published in Ecological Applications.  In the paper we report on an experiment testing if wood with more surface complexity would be colonised by more individuals of and more species of invertebrates (as expected by ecological theory, but inconsistently detected), and if such a difference between surface types would be lesser in urban streams than in rural streams.

Most species were more abundant on more complex wood blocks, but less so in more urban streams (partly because there were fewer species that could tolerate the tough urban stream environment, and partly because some species responded less to the increased surface complexity in more urban streams).  Collectively these effects resulted in small, uncertain increases in overall abundance and taxonomic richness with increased complexity in rural streams (a similar effect size to that reported in previous studies), but not in urban streams.

This all means that restoring streams by adding habitat complexity makes sense in rural streams that don’t suffer from large-scale catchment constraints, and is likely to contribute to increased biodiversity.  But in streams of urban catchments, similar actions are unlikely to be as successful: there you are better first concentrating on reducing catchment-scale impacts such as those of urban stormwater runoff.

E-mail Chris Walsh for a copy of the paper if you don’t have access.