The Melbourne Stream Network app  allows you to explore the streams and rivers of the Melbourne region.  Until now, the app was challenging if you weren’t sure of the name of the stream you were looking for.  I’ve now changed some settings and added features to make it easier to explore if you aren’t so familiar with the streams of Melbourne. 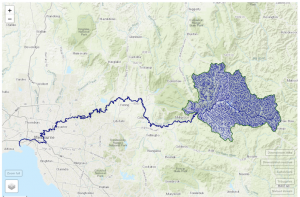 Every stream in the network has a unique name, and a unique three-letter stream code (called strcode in the database).  These streamcodes are the first three letters of reachcodes and sitecodes used in other databases like the Melbourne Water Macroinvertebrate Database.  If you are dealing with data that uses these codes, you can quickly search for the stream of interest by entering a strcode.  For instance, if you want to know which stream is BH1 and where it is, just enter….

And pressing return, shows Branch Creek (in the Upper Yarra Reservoir catchment) and its tributaries… 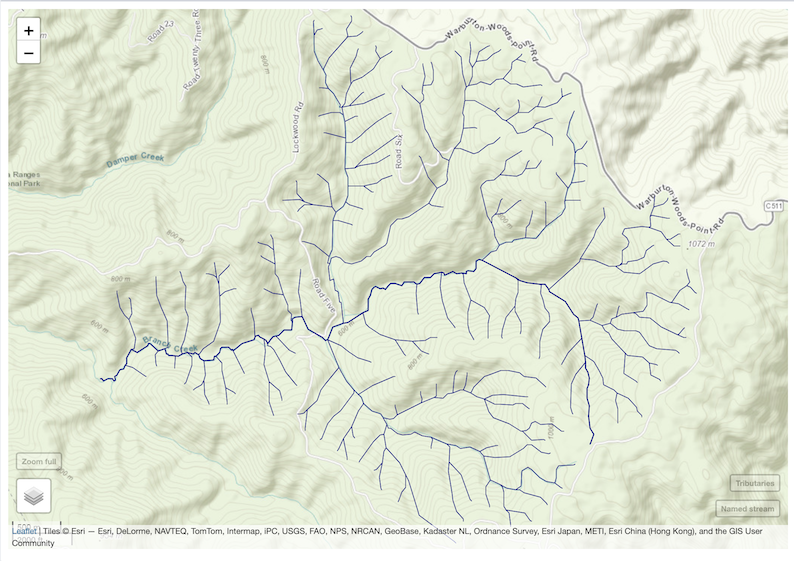 Having arrived at Branch Creek, if you are curious to know what the stream to its northeast is (and if that stream has a downstream river in common with Branch Creek), you can find out by selecting the “Show downstream” checkbox, which, in this case, alarmingly reveals the full length of the Yarra downstream… 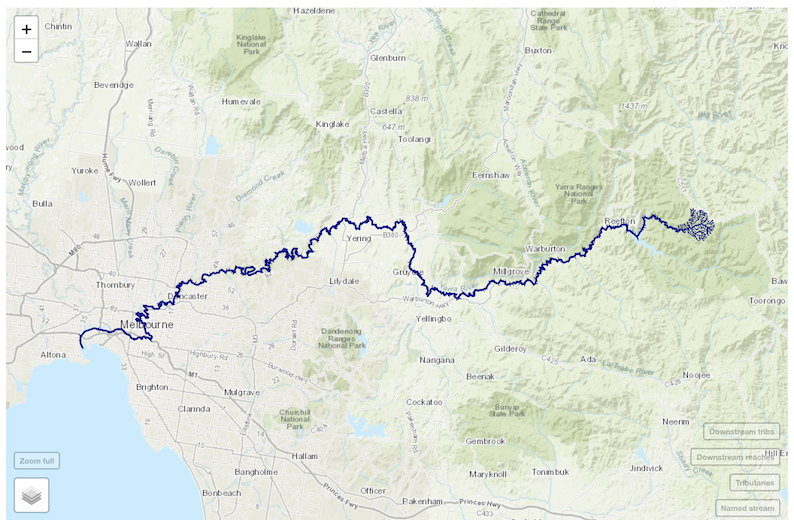 But if you zoom back into Branch Creek, you can see that the downstream reaches also include the terminal reaches of all downstream tributaries. Clicking on the terminal reach of the stream that heads up the large valley to the north-west shows this tributary to be Damper Creek… 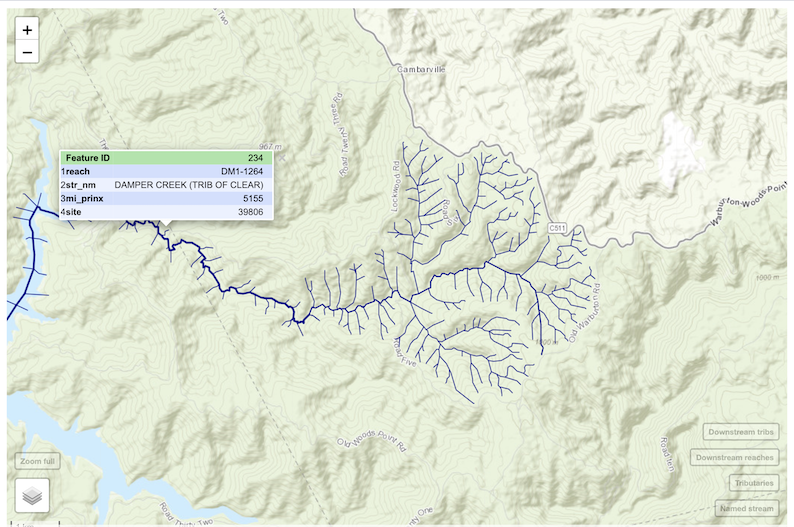 And by then checking the “Plot only upstream of selected reach” option, Damper Creek and its tributaries are mapped (together with its downstream reaches: you’ll need to zoom back in to get the view shown here) . 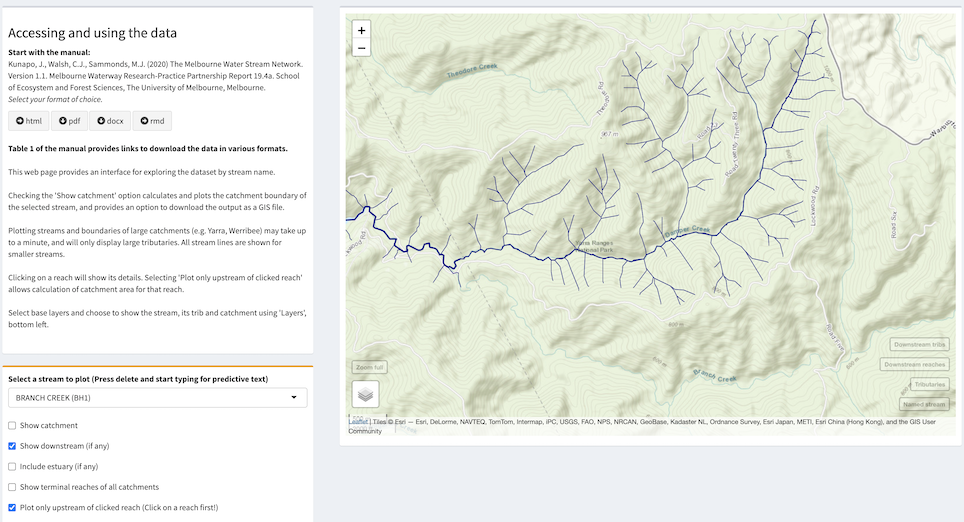 Explore any stream or drain

There are more than 130,000 reaches in the stream network map, and the web mapping software does not cope well with displaying such a big dataset of lines all at once (which is why the app is designed to explore primarily stream by stream).  If you have no idea of the name of the stream or drain you are interested in, the app now gives an option of showing every terminal reach in the region (that is, reaches that flow to the sea, or in a few cases to an aqueduct).  Click the “Show terminal reaches of all catchments” option to get a map like this… 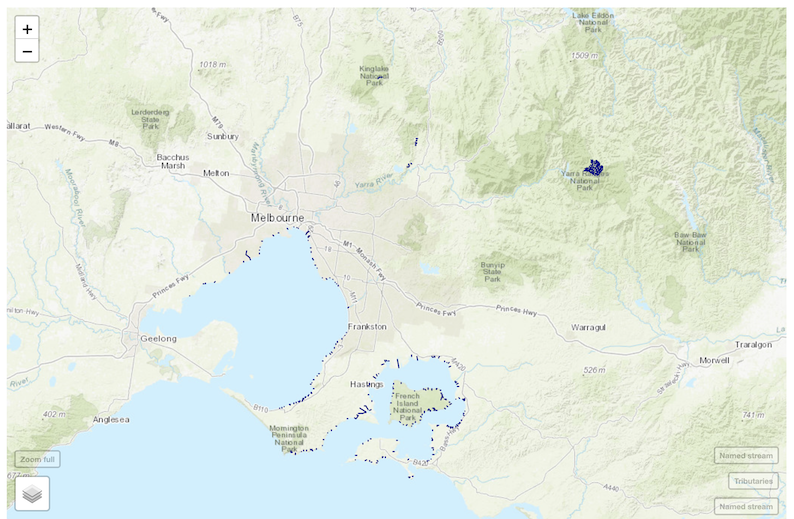 I clicked the option having selected “Branch Creek (BH1)”, which is the blue blob on the top right. You can click this option while having any other selection active. Note all of the small blue line segments around the coast (and a few inland).  If you were interested in knowing the catchment of the drain that enters Port Phillip Bay at Sandringham beach, you can zoom in and click on it to reveal it as the Abbot Street Main Drain. 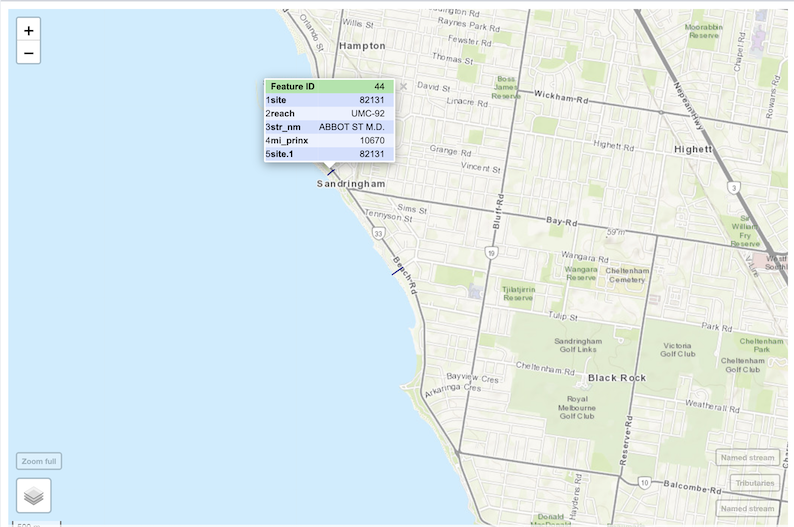 At this stage, you could use the “Plot only upstream of selected reach” option, but it is simpler if you just note the strcode (in this case “UMC”) and enter the strcode into the “Select a stream” box (after deselecting “Show terminal reaches..”).  Select  “Show catchment” to reveal the catchment boundary of this drain outlet. 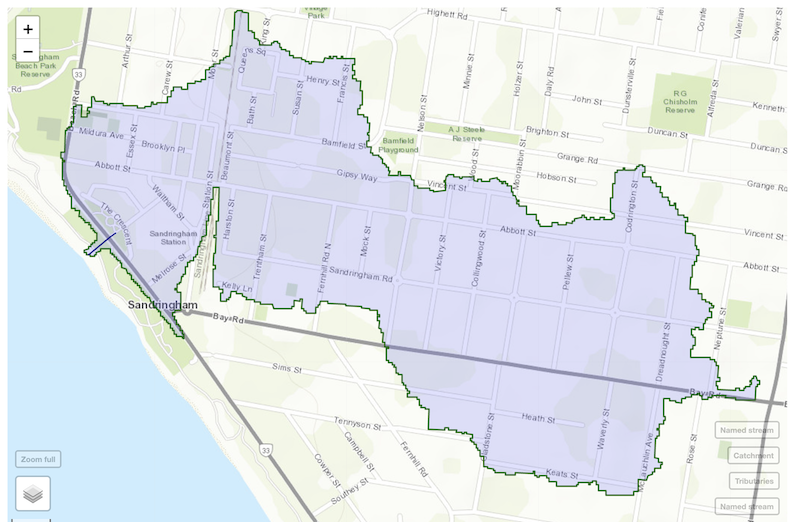 Dealing with the Yarra River

In earlier versions of the app, the Yarra River was a problem because it is so big (its catchment is more than one-third of the whole region).  It took a long time to plot, and tended to make the app unstable once loaded.  I have now set it so that selecting “YAR” in the “Select a Stream” box, plots the full length of the main-stem Yarra, all of the tributaries in the upper ~800 sq km of the Yarra catchment, and the bottom reaches of all tributaries downstream. 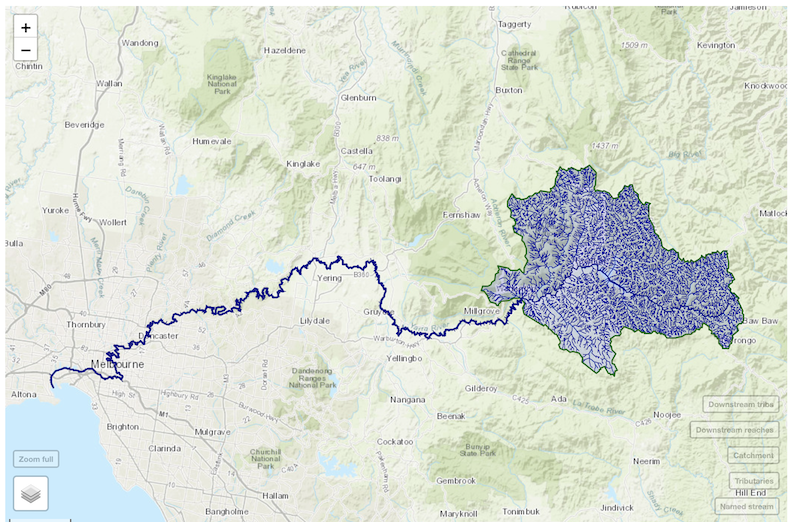 You can then explore any of the downstream tributaries like we did with Damper Creek downstream of Branch Creek above.  If you really want to push the app, and plot all of the streams of the Yarra catchment at once, select a stream other than the Yarra (say the default, GRD) and check the “Show terminal reaches of all catchments” option. Then select the terminal segment at the mouth of the Yarra, and select  “Plot upstream of selected reach”.  If it doesn’t crash the server, it will eventually plot a map like this. But you may want to go and have a cuppa while it’s doing it….