Home urban water management Stream management How much baseflow should be flowing down any particular stream?

How much baseflow should be flowing down any particular stream?

Matt Burns of the WERG has developed a new tool that has joined the urbanstreams.net family.  The Baseflow Estimator can help assess how much water should be flowing down any stream (or drain) across the Melbourne region.  Matt explains… 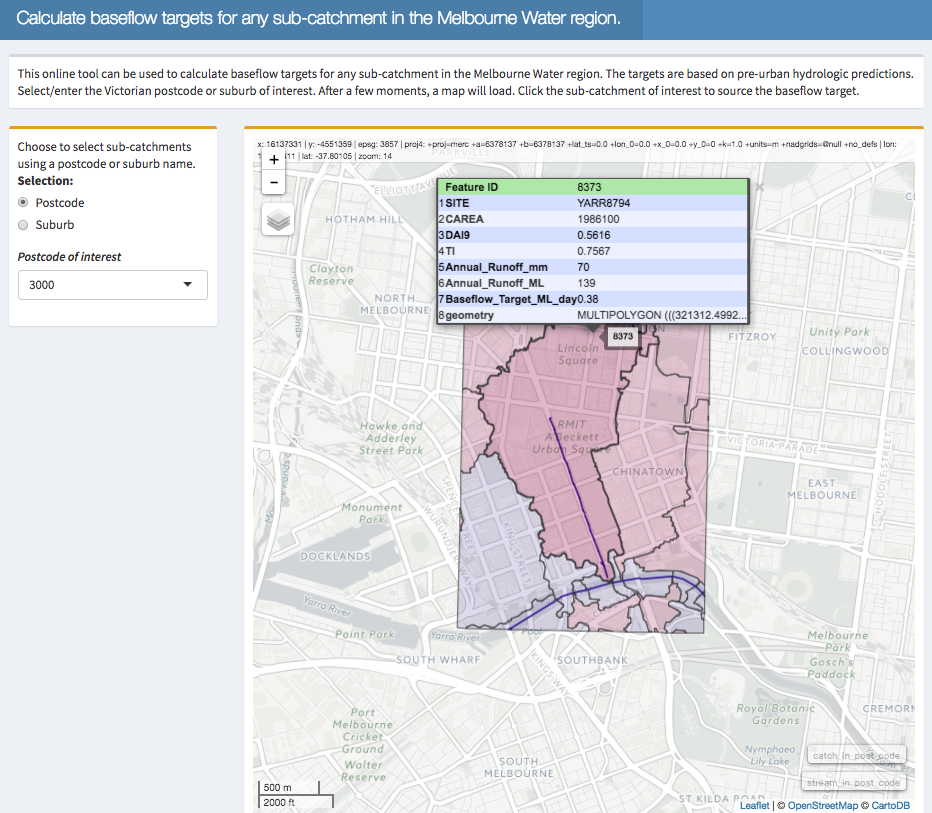 For undeveloped, unregulated catchments, very little rainfall becomes streamflow. For example in the Melbourne region, annual runoff coefficients—i.e. the ratio of streamflow to rainfall—can be as little as 0.1 in the dry west and not much larger in the wetter, eastern areas (~0.2) (Walsh et al., 2012). Most of the streamflow in such catchments is baseflow (e.g. Kirchner, 2003)—good quality water from groundwater sources.

The protection or restoration of urban stream ecosystems requires the appropriate management of flow-regimes. It has been hypothesized that restoring the water balance of urban catchments towards the condition observed in pre-urban catchments will elicit improved in-stream ecological structure and function. A major knowledge gap however, is pre-urban hydrologic targets for streams draining urban catchments.

The CSIRO, in conjunction with the Bureau of Metrology, have embarked on the Australian Water Availability Project (AWAP; https://www.csiro.au/awap/). The project uses modelling to predict historical and current soil moisture and all water fluxes contributing to changes in soil moisture (rainfall, transpiration, soil evaporation, surface runoff and deep drainage). The sum of surface runoff and deep drainage is total runoff. Predictions are available across the Australian continent at 5 km2 resolution and begin from 1900. Importantly, the predictions were made using methods which did not consider urban land-use. Thus predictions of total runoff represent possible pre-urban hydrologic targets for streams draining urban catchments.

Here we took the AWAP predictions of total runoff and converted this gridded, monthly data (in units of mm) to estimates of pre-urban mean annual and daily streamflow for all the ~16,000 nested subcatchments in the “DCI” subcatchment layer that is used commonly at Melbourne Water. These hydrologic predictions represent reasonable estimates of baseflow. They can thus be used to answer questions like: how much baseflow should we be aiming for for a particular stream?