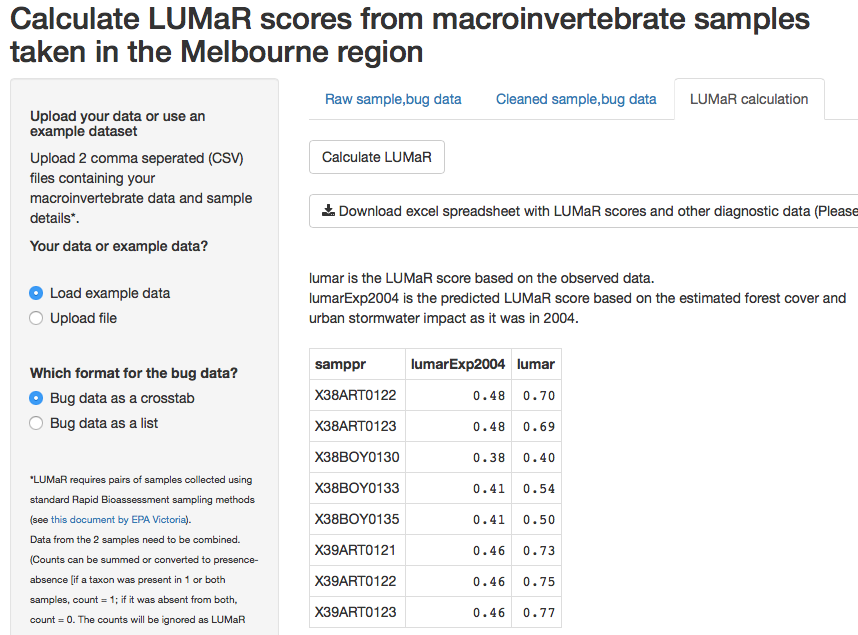 Walsh and Webb (2013) developed a new index of stream condition, LUMaR*, based on their distribution models of 60 families of macroinvertebrates across the Melbourne region.  The models allow prediction of the effects of loss (or gain) of forest cover and of conventionally drained urbanization on the occurrence of the 60 families.  LUMaR is an observed:expected index, that weights the observations of families by their sensitivity to forest loss and urbanization.  It is at least as sensitive as other macroinvertebrate indicators that are commonly used in the Melbourne region, but has the added advantage of having a maximum value of 1, predicted in sites without human impacts across the region.

The new LUMaR tool allows users to upload their own macroinvertebrate data from the Melbourne region to calculate LUMaR, and associated diagnostic statistics.  The tool provides some example data as a guide.

*Rather lamely (as is the tradition for acronyms of such things), LUMaR stands for Land Use Macroinvertebrate Response. If you don’t like it, be grateful that we didn’t go with our first attempt at a catchy acronym: MELMIF (the ghost of which lingers on the front page of Walsh and Webb 2013).